Not your ordinary teenage mind.

Bron Bahlmann
The fifth of six brothers, Bron likes food and the family dog, Bibs, with nearly the same affection. It depends on how hungry he is. 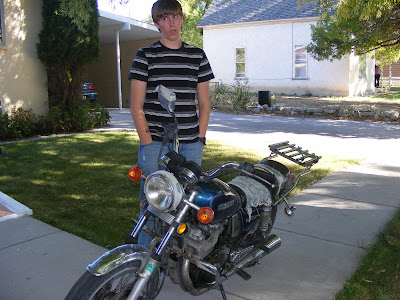 Andy's my oldest brother and he wants to buy a motorcycle but doesn't have lots of money. (He's still going to school at 30 years old! Madness, I say, MADNESS!) Mom found this old motorcyle (it's affordable, but needs a lot of work) and told me to stand beside it for size comparison so she could send Andy a picture. I was not thrilled. Why didn't she ask Zack? He was on the other side of her.
But to save time and earn Good Son points, I did it. (She didn't say I had to smile.)
Posted by Bron Bahlmann at 5:43 AM 2 comments:

I did my first school visits last Friday at Ephraim, Manti, and Gunnison Elementary. I wasn't nervous, but one lady teacher said I needed to speak louder. Kids from one school asked so many questions about my jumping stilts that they were almost late for lunch.
I want to do more visits.
Bring on the kids! Just keep them out from under my stilts.
Posted by Bron Bahlmann at 5:12 AM 3 comments: 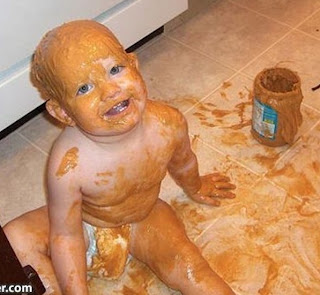 Well, Mom said she didn't want Michael sleeping at 4:00 p.m. because then he wouldn't sleep at night. I was eating peanut butter, and I'd let our dog, Bibs, in the house, so I had a great idea. I carefully put a blob of peanut butter on Michael's stomach. Bibs licked it off. Michael kept sleeping. So I put on more. Bibs ate more. Michael moved, but stayed asleep.
Okay. Something had to be done. I was helping Mom. So I put peanut butter on Michael's cheek. Bibs licked it off, Michael woke up, and he started shouting.
Why did he do that? Bibs has licked him before, and Michael thought it was funny.
Mom put Michael in a bubble bath. Even after sitting in there for half an hour, Michael said he still smelled like peanut butter.
No he didn't, but Bibs and I did!
(BIBS WOULD LOVE THE KID IN THE PICTURE! He's not Michael, though. Michael is 10.)
Posted by Bron Bahlmann at 5:45 AM 2 comments: